A joint venture partnership is, arguably, the messiest and most legally entangling type of strategic partnership there is. But let’s be honest: nothing that’s worth doing comes without risks and challenges!

With that in mind, we’ve taken a look at all things joint venture: what is one? Why would you want to form one? What should you watch out for? And what is nobody telling you about them? Read on to have all your questions answered.

What is a joint venture?

A joint venture is when two businesses form a cooperative arrangement to start a new business activity. It can be limited to one specific project (a time-bound arrangement that ends when the project’s objectives are met) or it can be an ongoing arrangement without an end date.

‘Hmmm sounds just like your standard strategic partnership to me?!’ we hear you say.

The difference is to do with how the partnership is structured.

In a nutshell, a joint venture allows the two brands involved to actually go into business with one another while remaining as two legally separate entities. Normally, this will involve the partners (known as the parent companies) forming a smaller company together (known as the child company).

This new business entity can be structured as a limited liability company, a corporation or a business partnership (by ‘business partnership,’ we’re talking about a way of organising a company that’s owned by two or more individuals – not a ‘strategic partnership’ which is a whole other thing!).

Brands will outline the resources, finance and assets that they’re happy to invest in the new entity, before coming to an agreement as to how that entity will be managed and how profits and losses will be divided between the parent companies.

Often, a joint venture will be 50/50, which is where the parent companies have equal ownership over the child company. In this case, they’ll typically have equal representation on the board of directors, equal say over how the company is run and they’ll jointly manage the company. 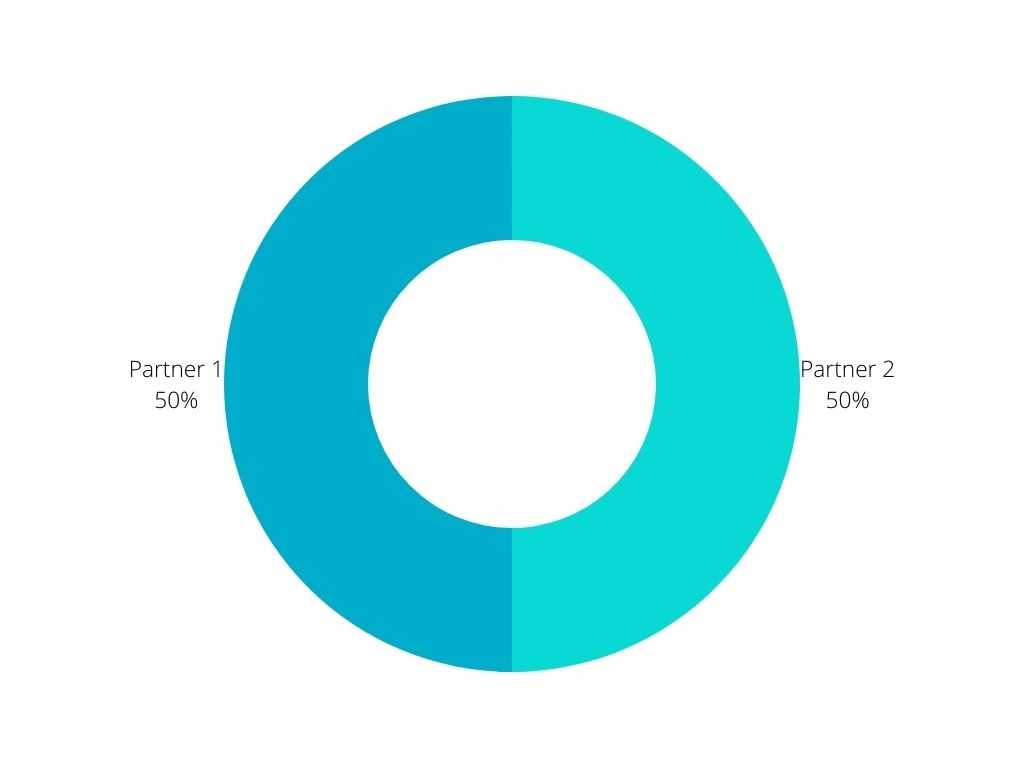 Alternatively, it could be majority-owned, which is where one of the parent companies owns more of the child company than the other does. For instance, one might own 70% while the other owns just 30%. Usually in this case, the brand that owns more will take on more of the risks and have a greater say over how the company is managed. 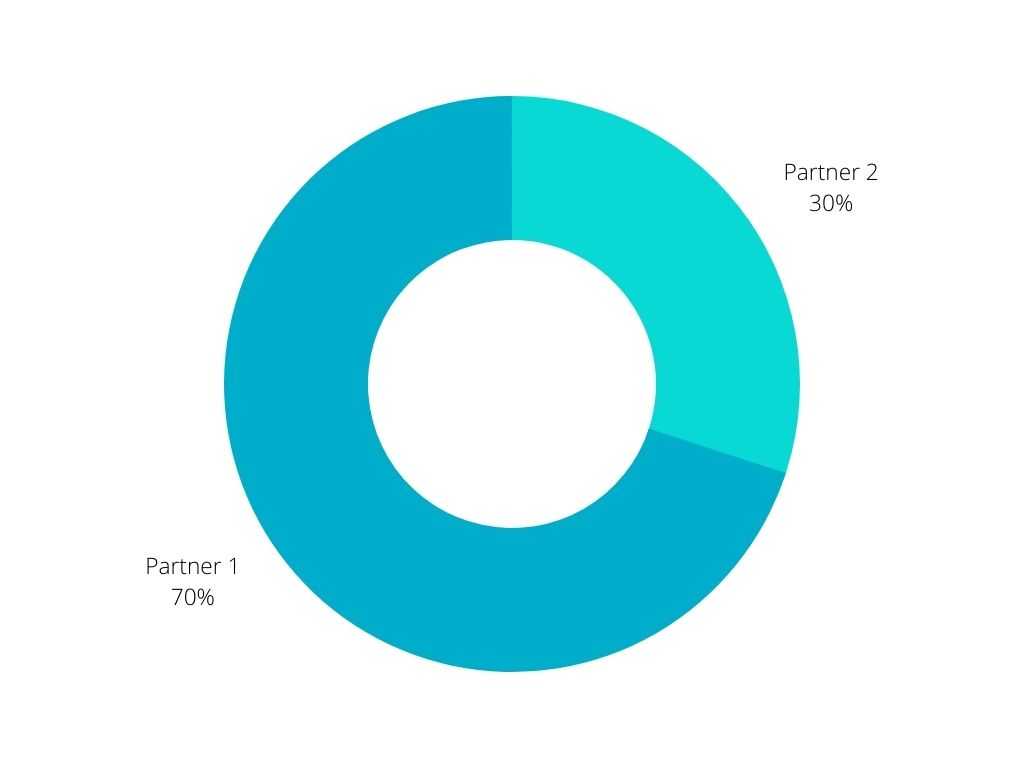 However, brands don’t have to form a child company in order to form a joint venture. Theoretically, brands can work together in the same way without forming a separate legal entity, which is known as an unincorporated joint venture. If this is the case, the partner brands don’t technically even have to sign an agreement! That said, if you’re considering this route, we would definitely recommend setting out your expectations in writing, to avoid any conflict later down the line.

What are the main types of joint venture?

There are four main types of joint ventures. Depending on why you want to form one and what kind of company your brand (and your partner brand) is, you could form any of the following.

What are the advantages of a joint venture?

Joint ventures can be a great way to combine the resources or expertise of two companies in order to reach a common goal.

For instance, two oil companies that both want to start drilling in a new area might choose to form a joint venture in order to pool their financial resources. In this way, they share the financial burdens and they also share the profits that come with it. This is an example of a project joint venture, as once the drilling is complete, the venture will most likely come to an end.

Alternatively, two automotive companies operating in different countries might choose to start a joint venture to help one of the brands to have their vehicles manufactured and distributed in a new territory. The brand that’s familiar with the territory shares local knowledge, expertise and contacts with their partner and they both take a share of the profits. But, depending on the country, it can also be a necessity in order to meet regulations.

For instance, until recently, China required all manufacturing operations to be at least 50% Chinese owned. This was a primary reason for the joint venture between BMW and the Chinese Automobile manufacturer, Brilliance Auto Group, in 2003. The pair teamed up to produce and sell BMW vehicles in China, with BMW taking a 50% stake. However, BMW has since announced its plans to up its stake in the child company to 75% to coincide with the relaxation of restrictions. Read our list of famous joint venture examples to learn more.

Ultimately, forming a joint venture allows brands to share resources while maintaining their independence. In this way, they can remain competitive and strengthen their offerings both as separate entities and as partners. 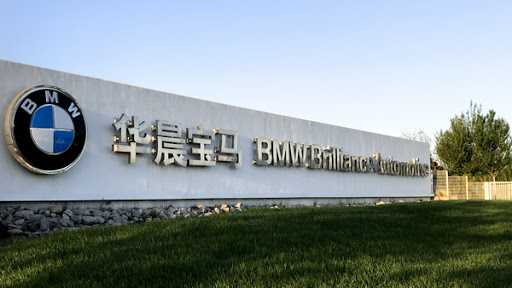 What about the disadvantages?

Incorporated joint ventures that involve the formation of a separate legal entity are legally entangling. Your child company will be liable to pay tax and will be subject to the law. So, it’s important that you trust your partner to keep up their end of the bargain, and that you have a robust, signed agreement to fall back on.

Probably the biggest disadvantage of a joint venture is that once you’re in one, it can be hard to extricate yourself. In this way, they carry a lot of risks.

Who are joint ventures for?

Joint ventures tend to be popular with big brands that need to stay ahead of their competition in a fast-moving market (think Disney, Microsoft, Boeing.... check out our list of famous joint venture examples for the full lowdown). By partnering with another brand, they’re able to access more resources, allowing them to build a stronger entity than they can alone.

Due to their legally entangling nature, joint ventures aren’t a particularly popular choice with small brands that don’t yet have much experience with strategic partnerships. For those that want to share resources and risks without entering into a joint venture, an alternative option is to form a new equity alliance. This enables brands to share resources and risks by allowing one brand to purchase a percentage of equity in another.

Well, that depends on your definition of what ‘works’ really means. According to McKinsey, only 30% of joint ventures meet or exceed all parent companies’ expectations. Not a huge number when you consider the level of risk involved!

However, interestingly enough, the study also shows that 25% of joint ventures still benefit all the companies involved, despite not meeting or exceeding their expectations. And yet another 23% meet or exceed one parent company’s expectations but not the other’s. So if we take the ‘glass half full’ approach, we could say that there is some level of benefit in 78% of cases – a much more appealing figure!

In another report from McKinsey, it was revealed that 47% of managers cite alignment on objectives as a core reason for joint venture partnership success, while 38% cite lack of trust and internal communication as a key reason for their failure. So, it sounds like joint ventures that facilitate a level of trust and transparency between partners, particularly in relation to objectives, are most likely to work.

With that in mind, one thing’s vital: before you sign a joint venture agreement, make sure that you and your partner are on the same page when it comes to its objectives. And, when you’ve entered into the partnership, keep working on that trust and communication. Check out our piece on why partnerships fail to learn more about how to make your joint venture work.

What goes into a joint venture agreement?

Putting together a robust joint venture agreement is key to ensuring that both parties have the same expectations. Ultimately, it’s the best possible way of avoiding confusion and disagreements later down the line!

Most joint venture agreements will include information about:

Ideally, you should also outline an exit strategy in case one partner wants to leave the agreement. For example, you could put a set notice period in place.

As you can see, joint ventures can be messy and they’re certainly a big commitment. But they also allow brands to work together even more closely, sharing resources, personnel and financial risks in order to bring all the partners involved benefits they couldn’t access alone.

Whether you’re ready to jump into a joint venture with all guns blazing or you want to take things slowly by starting a less legally entangling strategic partnership first, one thing’s sure: signing up with Breezy will make your hunt for potential partners a whole lot quicker and easier! Enjoy.

Does BMW Brilliance ring any bells? How about MillerCoors? You must have heard of the streaming platform, Hulu? Well, all three of them have one thing in common – they’re joint ventures!